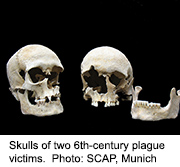 FRIDAY Sept. 2, 2016, 2016 — Ancient skeletons have helped scientists learn more about plague, and the discoveries could prove important in future outbreaks.

Centuries before the Black Death in the 1300s, the Justinian plague in the sixth century killed about 50 million people (15 percent of the world’s population) across the Byzantine Empire.

German scientists have now confirmed that both outbreaks were caused by the same bacterium — Yersinia pestis.

They found Y. pestis in sixth-century skeletons from Altenerding, an ancient burial site near Munich, and created the first high-quality genome — the full set of genes — of that strain of Y. pestis.

Among other things, the work uncovered 30 new mutations and gene changes unique to the Justinian strain. The discoveries offer new insights about the evolution of Y. pestis since the Justinian plague.

The data suggest the strain was genetically more diverse than once thought. But how it got to Germany remains a mystery, according to the study published online Aug. 30 in the journal Molecular Biology and Evolution.

“Our research confirms that the Justinianic plague reached far beyond the historically documented affected region and provides new insights into the evolutionary history of Yersinia pestis,” researcher Michal Feldman said in a journal news release.

Feldman studies archaeogenetics at the Max Planck Institute for the Science of Human History in Jena, Germany.

Plague is considered a re-emerging disease in parts of the world, so new insight into evolutionary changes, adaptation and its impact could prove important, the study authors said.

See The Deadly Seven: Where Are These Diseases Now? for more information about plague.

The U.S. Centers for Disease Control and Prevention has more on plague.