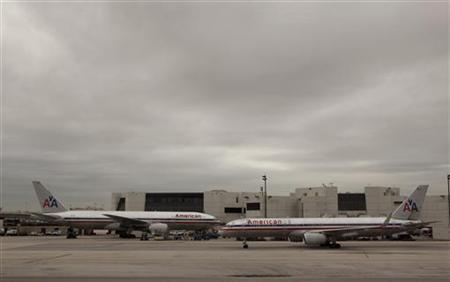 CHICAGO (Reuters) – A female flight attendant who started ranting about a possible crash over the public address system of an American Airlines plane on Friday was subdued by passengers and crew as the plane returned to the gate, passengers said.

The incident at Dallas-Fort Worth International Airport led the pilot to taxi back to the gate, where police and FBI agents took the unidentified flight attendant for a psychiatric evaluation, airport spokesman David Magana said.

Passengers who arrived later at Chicago’s O’Hare International Airport said the attendant had begun babbling about technical problems with the plane, saying “Captain, I can’t be responsible for crashing this plane.”

“No one was responding, and then when she said ‘crash’ twice, we knew something was wrong,” said an unidentified passenger, whose comments were broadcast on WBBM radio in Chicago.

“She said she was bipolar, so we continued to hold her until police arrived. When they showed up they put the cuffs on and got her off the plane,” another unidentified passenger said.

The attendant also spoke about losing friends in the September 11, 2001, terror attacks on the United States.

“She said she just wanted to save people and that she wouldn’t be responsible if the plane crashed,” passenger Whitney Bessler was quoted as saying by the Dallas Morning News.

Another female attendant suffered minor injuries during the altercation on board the Chicago-bound plane, Magana said.

The FBI and airport police both said they did not plan to charge the attendant with any crime.

It was an “unfortunate but non-violent confrontation involving a flight attendant aboard an aircraft preparing for takeoff,” and no one was seriously injured, the Association of Professional Flight Attendants, a union, said in a statement.

American Airlines, a unit of AMR Corp, issued a statement saying the incident involved “some of the cabin crew” and said “two flight attendants were taken to local hospitals for treatment.”

Tim Smith, a spokesman for the airline, declined further comment, saying the incident was being investigated, and he apologized to passengers.

When the flight finally got under way with a new cabin crew, passengers who wanted drinks were served for free, Christakos said.

The Mercedes, Amex Card: Spend a Ton, Save a Fortune
How Gravity Rush’s Designers Took the Third Option