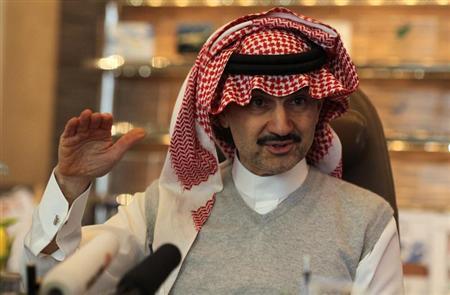 Saudi Prince Alwaleed bin Talal speaks during an interview with Reuters at his offices in Kingdom Tower in Riyadh, May 6, 2013.

LONDON (Reuters) – Saudi billionaire Prince Alwaleed bin Talal has sued Forbes magazine for libel in a British court, alleging its valuation of his wealth at $ 20 billion was short of the mark by $ 9.6 billion, Britain’s Guardian newspaper reported on Friday.

The prince, a grandson of Saudi Arabia’s founder and nephew of King Abdullah, had attacked the U.S. magazine’s ranking of world billionaires as flawed and biased against Middle Eastern businesses after he was ranked number 26 in this year’s list.

An official at the High Court in London confirmed that Prince Alwaleed had filed a defamation suit against Forbes, its editor Randall Lane, and two of its journalists on April 30. Details of the claim were not immediately available.

Through his Kingdom Holding Company, Prince Alwaleed owns large stakes in Citigroup, News Corp and Apple Inc, among other companies. He is also owner or part-owner of luxury hotels including the Plaza in New York, the Savoy in London and the George V in Paris.

The public spat attracted a lot of comment, but Forbes stuck by its estimate of Prince Alwaleed’s wealth and published an in-depth article in its March 25 issue entitled “Prince Alwaleed and the curious case of Kingdom Holding stock”.

The article gave details about how Forbes had arrived at the figure of $ 20 billion and criticized what it described as a lack of transparency by Kingdom Holding in detailing its assets.

The article also described Prince Alwaleed’s marble-filled, 420-room Riyadh palace, his private Boeing 747 equipped with a throne, and his 120-acre resort on the edge of the Saudi capital with five homes, five artificial lakes and a mini-Grand Canyon.

The High Court official in London said the two journalists named in the defamation claim were Kerry Dolan, the author of the article, and Francine McKenna, who was credited with additional reporting.

No date has been set for a court hearing in the case, which is in its very early stages, the official said.

The law firm Kobre & Kim, which the Guardian said was acting for Prince Alwaleed in the suit, declined to comment. New York-based Forbes could not immediately be reached for comment.

The Guardian article quoted the magazine as saying: “We’re very surprised at claims that Prince Alwaleed has decided to sue Forbes, particularly if he has done so in the United Kingdom, a jurisdiction that has nothing whatsoever to do with our recent story which raised questions about his claims about his wealth.”

Under British libel law, a claimant has only to prove that a publication was defamatory. Then the burden of proof passes to the defendant, who has several possible defenses, including that the publication was true.