Candy Cane, meet Mary Jane. With this Candy Cane Joint, you’ll definitely be the hit of all your holiday parties. What You’ll Need: Rolling Papers (4) Grams of Weed (4) Grinder (1) Glass Tip (1) *optional Step One: Select your herb. For this tutorial, I decided to roll up some Sour Cherry Sherbert from TKO Reserve. I […]
Marijuana 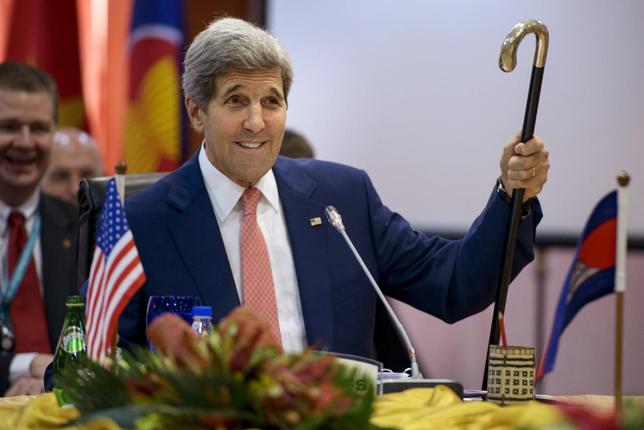 US Secretary of State John Kerry holds up Joseph Kennedy’s cane, which has been used by John F. Kennedy and Ted Kennedy, while talking about his broken leg during the 8th Lower Mekong Initiative Ministerial Meeting at the Putra World Trade Center August 5, 2015 in Kuala…
Reuters/Brendan Smialowski/Pool

U.S. Secretary of State John Kerry on Wednesday swapped the crutches he has been on since breaking his leg in a cycling accident in May for a silver-handled cane that served successive members of the Kennedy clan, including former president John Kennedy and his father Joseph.

Kerry appeared with the cane at meetings with countries of the Association of Southeast Asian Nations in Malaysia. He said it had been loaned to him by Vicki Kennedy, widow of Senator Teddy Kennedy.

“This cane has a history,” Kerry joked at the start of one meeting in Kuala Lumpur.

“This cane belonged to Ambassador Joseph B. Kennedy in England during the war. And after the war, President Kennedy, before he became president, used this cane when his back was bad after the war,” he said.

“And then Teddy Kennedy, who broke his back, used the cane,” Kerry said, adding that Teddy Kennedy had loaned him the stick twice in the past after he had an operation on his knee.

“So when Vicki Kennedy, his widow, heard that I had broken my leg, she knew I was going to need the cane,” Kerry said. “She loaned it to me. So here it is. It’s – and the third time I’ve used it – three times is lucky, right?  No hard breaks.”

Kerry, an avid sportsman, broke his right leg in an accident while cycling a portion of the Tour de France route near Scionzier, France, on May 31.

He has maintained a punishing travel and work schedule while on crutches following the accident, which came a day after he met his Iranian counterpart, Mohammad Javad Zarif, as part of marathon talks that eventually brought about a deal aimed at curbing Tehran’s nuclear program.

Kerry has been keen to get off his crutches since, but aides were taking no chances, hovering in the background with them at the Kuala Lumpur meetings, just in case they were needed again.

BERLIN (Reuters) – A feisty 90-year-old German woman chased away three would-be burglars from her rural farmhouse with her cane, police said on Monday.

The retired farmer was moving around her house with the help of a walking frame and spotted the intruders — two men and one woman.

She grabbed her cane and started beating the burglars with it. The trio fled the house in a town outside Muenster.

“It was quite courageous of her,” a police spokeswoman said. “But on the other hand it was also quite dangerous. She was quite fortunate that nothing serious happened.”

AP – Authorities say an irate 84-year-old man hit a deputy in the stomach with his cane when the officer warned him to leave a clinic where he had been cursing at an office manager.
Yahoo! News: Odd News – AP