SEOUL (Reuters) – A South Korean service is offering free funerals – but only to the living.

More than 25,000 people have participated in mass “living funeral” services at Hyowon Healing Center since it opened in 2012, hoping to improve their lives by simulating their deaths.

“Once you become conscious of death, and experience it, you undertake a new approach to life,” said 75-year-old Cho Jae-hee, who participated in a recent living funeral as part of a “dying well” program offered by her senior welfare center.

Dozens took part in the event, from teenagers to retirees, donning shrouds, taking funeral portraits, penning their last testaments, and lying in a closed coffin for around 10 minutes.

University student Choi Jin-kyu said his time in the coffin helped him realize that too often, he viewed others as competitors.

“When I was in the coffin, I wondered what use that is,” said the 28-year-old, adding that he plans to start his own business after graduation rather than attempting to enter a highly-competitive job market.

South Korea ranks 33 out of 40 countries surveyed in the Organisation for Economic Co-operation and Development’s Better Life Index. Many younger South Koreans have high hopes for education and employment, which have been dashed by a cooling economy and rising joblessness.

“It is important to learn and prepare for death even at a young age,” said Professor Yu Eun-sil, a doctor at Asan Medical Center’s pathology department, who has written a book about death.

Jeong said he is heartened when people reconcile at a relative’s funeral, but is saddened they wait that long.

“We don’t have forever,” he said. “That’s why I think this experience is so important – we can apologize and reconcile sooner and live the rest of our lives happily.”

Occasionally he has dissuaded those contemplating suicide.

“I picked out those people who have asked themselves whether … they can actually commit suicide, and I reversed their decision,” Jeong said.

The message of personal value resounded with Choi.

“I want to let people know that they matter, and that someone else would be so sad if they were gone,” he said, wiping away tears. “Happiness is in the present.”

(Reuters) – China will crack down on strippers who perform at rural funerals, the Ministry of Culture said on Thursday, taking aim at performances it described as illegal and which corrupt “social morals”.

State media have said burlesque shows at some funerals aim to draw more mourners and show off the family’s wealth, in a practice that is infrequent, although gaining in popularity.

In a notice on its website, the ministry called for a “black list” of people and workplaces that engage in such shows.

It singled out a group of burlesque dancers, the Red Rose Song and Dance Troupe, who did a strip-tease after the small-town funeral of an elderly person in the northern province of Hebei in February.

The group took off their clothes after performing a traditional song-and-dance routine, the ministry said.

One leader of Red Rose, surnamed Li, was punished with 15 days in detention and a fine of 70,000 yuan ($ 11,300) after law enforcement officials intervened. 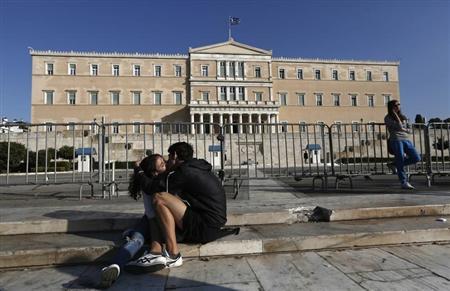 A couple kiss in front of the parliament building during an anti-austerity rally in central Athens November 14, 2012.

ATHENS (Reuters) – Fewer Greeks are walking down the aisle as their country’s deep economic crisis takes a toll on their famously lavish weddings, an age-old ritual that has become an unbearable cost for those struggling to make ends meet.

Religious wedding ceremonies in bell tower chapels overflowing with flowers, meter-high candles and candy wrapped in tulle, are a deeply ingrained tradition in Greece, where the powerful Orthodox Church plays an influential role in society.

But as recession slides into its sixth year, unemployment rises and poverty spreads, a church wedding is a luxury many couples can no longer afford.

For 28-year-old bride Nafsika Koutrokoi, who works at a butcher shop, fulfilling her dream of marrying her fiancé, a cable technician, in church was a difficult decision that required huge sacrifices.

“Things are quite tough right now,” she said after the wedding. “We cut down on many things, from invitations to the reception, on everything.”

The number of Greek couples who tied the knot in church tumbled to 28,000 in 2011, two years into Europe’s debt crisis, compared to the pre-crisis level of 40,000 in 2008, according to the country’s statistic service ELSTAT.

As Greece’s crisis deepens and successive governments are forced to impose wage cuts and tax rises in exchange for the foreign aid keeping the economy afloat, the wedding industry’s countless shops and planners are also feeling the pinch.

“They want whatever is cheapest, which often is not possible because the cost of everything is rising,” said wedding shop owner Anastasia Theophanopoulou, whose family business has sold wedding supplies for decades. “There is a drastic drop.”

The downturn has also had an unexpected effect on another ceremony revered by many Greeks – funerals.

With more and more Greeks having trouble paying for funerals, municipal authorities in Athens have reduced the cost of burial in the capital’s cemeteries.

“There was always money for the deceased, but now people are in a very bad state,” said Athens City Councillor Nikos Kokkinos, who is responsible for cemeteries.

Some Greeks do not collect their dead loved ones from the hospital to avoid having to pay for the funeral. Others can no longer afford a traditional marble tombstone and so leave plots as simple dirt mounds overgrown by weeds, a cemetery official said.

Funeral home director Vassilis Tranou has been forced to lower prices at his family-run business and sometimes will do a funeral – which costs at least 1,500 euros – for free.

“People don’t have the money anymore or they don’t spend like they used to, and Greeks are usually people who take great care with the people they have lost,” Tranou said.

“It makes your hair stand on end,” he said, recounting the story of a man who was only able to bury his mother by selling a family heirloom of four gold coins.

AP – A funeral home in Brazil is broadcasting its services live over the Internet, giving some of the millions of Brazilians living abroad the chance to say a final goodbye to their loved ones.
Yahoo! News: Odd News – AP

Reuters – Football club songs and pop or rock music have been banned from funerals in Catholic churches in Australia under new guidelines distributed this week to priests and funeral directors.
Yahoo! News: Oddly Enough – Reuters UK