MANILA (Reuters) – Elaborately dressed cats and dogs and even a palm-sized sugar glider were among the animals blessed outside a Philippine mall on Sunday in celebration of the feast of Saint Francis of Assisi, the patron saint of animals and World Animal day.

Pet owners raised their furry friends as a priest sprinkled holy water on the menagerie.

“They are like humans to us, so we need to have them blessed and make sure they do not get sick, and continue being with me,” said Filipino dog owner Ram de Castro, while carrying his pet dressed in Miss Universe-inspired red evening gown.

More than 100 pets were brought in for this year’s religious and blessing ceremony.

Anna Padrilao, a cat owner, said it was only right that her pet gets blessed because he is also a creation of God.

“Animals should be treasured the same way as humans”, she said.

World Animal Day, a day of action recognized worldwide for animal rights and welfare, is celebrated on Oct. 4, the feast day of Saint Francis of Assisi.

A noisy gecko was the latest wildlife contributor to an address by Duterte, interrupting the leader on Thursday evening just as he launched another tirade at human rights groups critical of his bloody war on drugs.

The reptile’s persistence caused laugher in the crowd of mostly soldiers, causing Duterte stop mid-sentence, turn to his left and pause for a while to see what the off-camera commotion was.

“You brought a gecko here?” he asked an official sitting behind him, drawing laughs.

Geckos are common across Southeast Asia. The small lizard-like reptiles are known for their ability to produce various loud sounds, from barks to chirps, to communicate or when threatened.

While activists accuse Duterte of cowing his opponents into silence, reptiles and insects have no qualms about pestering him during his often hours-long, televised addresses.

A big cockroach reut.rs/2Od6b4s crawled up his shoulder and down his shirt during a speech in May when he was lambasting an opposition party ahead of a national election. He joked the cockroach was its supporter.

Two months later, a fly kept buzzing around him and landing on his forehead, just as he was berating his rivals in the Catholic clergy. He said in jest that the fly was acting on their orders.

The time is now to advance medical cannabis in the Philippines, said a policy advisor to Congressman Rodolfo T. Albano, who authored recent legislation. On Sept. 25, the Philippines Parliamentary House Committee approved a medical cannabis bill and pushed it forward in the political process. This move is an incredible achievement for a nation currently […]
Marijuana

Amidst a bloody drug war that has reportedly claimed more than 10,000 casualties, the Philippines have taken a medical marijuana bill one step closer to reality. The House Committee on Health unanimously endorsed the “Philippine Compassionate Medical Cannabis Act” yesterday, after in-depth consultations with patients, healthcare workers, and advocates. The bill was authored by Representative […]
Marijuana

The drug enforcement situation in the Philippines continues to grow in curiosity. Not even 24 hours after Parliament approved a third and final reading to reinstate capital punishment for drug-related offenses, the Philippines House Committee on Health began debating a bill to legalize medical marijuana. Congressman Rodito Albano’s House Bill 180 outlines a program that […]
Marijuana 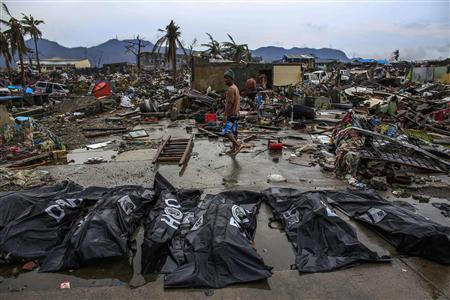 (Reuters) – The U.S. military has began scaling back its emergency relief operations in the Philippines as work shifts to recovery and rehabilitation in typhoon-hit areas, a U.S. aid agency official said on Saturday.

Typhoon Haiyan, the most powerful storm to make landfall this year, struck the central Philippines on November 8, killing more than 5,200 people, displacing 4.4 million and destroying an estimated 12 billion pesos ($ 274 million) worth of crops and infrastructure.

The U.S. Navy has pulled out its nuclear-powered aircraft carrier, the USS George Washington, but still has ten C-130 aircraft delivering relief supplies. Last week, the United States had 50 ships and aircraft in the disaster zone.

Jeremy Konyndyk, director for Foreign Disaster Assistance at the U.S. Agency for International Development (USAID), said the U.S. military had started to reduce its presence to allow civilian aid agencies to step up efforts.

“What we have seen, particularly over the past week, is now civilian and private-sector commercial capacity has started coming back up again and that is taking the burden off of the military actors,” Konyndyk told Reuters in an interview.

Konyndyk said there had been significant progress in meeting people’s basic needs as more roads and ports opened in the worst-hit Leyte and Samar islands.

“Food has been distributed to 3 million people, shelter kits have been delivered to tens of thousands of families. I think the situation with immediate humanitarian needs is becoming stabilized.”

Aid delivery was gathering pace as access to affected areas improved, the U.N. humanitarian office said it its latest report. However, major issues remained including the distribution of food and access to clean water and shelter material.

Konyndyk said the next step was for USAID and other international aid agencies to refocus their efforts on long-term recovery and reconstruction, giving priority to shelter and livelihoods for farmers and fishermen.

The United States has increased its typhoon aid to nearly $ 52 million, but latest estimates from the United Nations showed the disaster rehabilitation plan would cost $ 348 million. Only 38 percent of the plan is funded.

The United Nations is working to finish a blueprint for a Haiyan Action Plan reconstruction strategy by December 9. The World Bank has increased to almost $ 1 billion its aid to support relief and reconstruction.

mayor has revealed that Philippine authorities may ban sex on the world-famous beaches of Boracay island after a television crew filmed two naked couples making out in public on New Year’s Day. The clip showed one pair apparently having sex on the beach
Moreover Technologies – Search results for… television – 30 of 10476 returned

Philippine authorities may ban sex on the world-famous beaches of Boracay island after a television crew filmed two naked couples making out in public on New Year’s Day, the local mayor said Thursday. The clip showed one pair apparently having sex on the
Moreover Technologies – Search results for… television – 30 of 9947 returned

Full migration to digital television in the Philippines will take place 10 years from now, estimates the Philippines’ National Telecommunications Commission (NTC). “This year, the NTC has commenced the transition of the broadcast industry from
Moreover Technologies – Search results for… television – 30 of 9390 returned

Reuters – In the Philippines, a land of passionate singers, taking on the national anthem is about to get a little more daunting — get it wrong and you could land in jail for a couple of years and be fined more than $ 2,000 (1,260 pounds).
Yahoo! News: Oddly Enough – Reuters UK