By Blake Nelson JEFFERSON CITY, Mo. (AP) — Supporters of legalizing medical marijuana in Missouri turned in signatures Friday for two ballot initiatives that would let voters decide the issue in November. A third group has until Sunday to submit its own signatures. Each initiative would allow patients with cancer, HIV, epilepsy and a variety […]
Marijuana

New Approach South Dakota submitted nearly 15,000 signatures to the Secretary of State with hopes of adding a medical marijuana measure to the 2018 ballot.

South Dakota Secretary of State Shantel Krebs said the review of the submitted measure would likely be finished within four months. Her office conducts a random sampling of the signatures to determine validity, with at least 5% of the collected signatures being reviewed.

The medical marijuana measure that was submitted for signature validation would allow patients with certain conditions like cancer, HIV/AIDS, chronic debilitating pain, and PTSD to obtain a registration card to possess up to three ounces of marijuana.

To read the full text of New Approach South Dakota’s proposed medial marijuana ballot initiative, check our their website. We are hopeful that the initiative will qualify for the 2018 ballot and that South Dakotans will have the opportunity to adopt a compassionate policy for medical marijuana patients.

On Monday, the Coalition to Regulate Marijuana Like Alcohol will submitted petitions to put a ballot initiative on the 2018 ballot in Michigan that would make marijuana legal and regulate it for adults.

Organizers of a ballot drive to legalize the use of marijuana for recreational purposes in Michigan submitted 365,000 signatures to the state Monday, which appears to be more than enough to qualify the initiative for a statewide vote in 2018.

The Coalition to Regulate Marijuana Like Alcohol said the prohibition against recreational marijuana is “a massive failure.”

Michigan has allowed medical marijuana use for nearly a decade. If the new proposal were to make the ballot and win voter approval, it would make Michigan the ninth state to legalize the drug for recreational use.

If passed, people 21 and older could possess up to 2.5 ounces (71 grams) of marijuana and grow up to 12 plants at home. A 10 percent tax on marijuana would be assessed on top of the 6 percent state sales tax.

Josh Hovey, a spokesman for the coalition, said fully legalizing the drug for adults would generate hundreds of millions in new tax revenue. He estimated that 20,000 people in the state are arrested annually for marijuana possession and cultivation.

“Oftentimes it’s just adults using a plant that is less harmful than alcohol or tobacco,” he said at a news conference a couple of blocks from the state Bureau of Elections. “It’s breaking up families. It’s destroying communities. … We can impose some regulations, create a new industry in the state. You’re going to see not only the tax benefits of that, but jobs, less crime and letting law enforcement go after things that are more important.”

State officials will take about two months to review the voter signatures. If they determine that about 252,000 are valid, the bill would go to the Republican-controlled Legislature. Lawmakers would have 40 days to adopt the measure or it would be placed on the November 2018 statewide ballot. Legislators could propose an alternative marijuana bill to put before voters alongside the initiative.

The campaign is proud to have the support from both national and local advocacy organizations including the Marijuana Policy Project, the National Cannabis Industry Association, the ACLU of Michigan, the Drug Policy Alliance, the National Patients Rights Association, Michigan NORML and MI Legalize.

With nine months left to gather signatures, the hard-working volunteers of New Approach Missouri are well on their way with over 50,000 already collected! The total number required to qualify for the 2018 ballot is 160,199.

However, gathering enough total signatures is only one part of the process in Missouri. It is also necessary that the signatures be distributed across different congressional districts in the state. So New Approach Missouri is planning to hire a professional petitioning firm to help push the campaign over the finish line and to ensure that geographic distribution requirements are met.

In other news, the list of advocates calling for medical marijuana in Missouri has expanded to include retired NFL player Kyle Turley, who played for both the Kansas City Chiefs and the St. Louis Rams! Kyle is a patient and an advocate because medical marijuana has allowed him to live without pain and painkillers, as well as helping him to overcome depression. Check out his story here.

New Approach South Dakota has 90 days to collect the remaining signatures needed to place marijuana initiative measures on the 2018 ballot.

Signatures are tied to the number of votes cast in the state’s most recent gubernatorial election, so each petition needs at least 13,871 signatures by November 2017 to make it on the November 2018 ballot.

To read the petitions and for more information about adding your signature, check out New Approach South Dakota’s website.

Michigan’s voters first said, “Yes” to medical marijuana in 2008. Great news at the time of its passage, thanks to the 100,000-plus signatures recently gathered by the Coalition to Regulate Marijuana Like Alcohol (CRMLA), full-blown legalization could be just around the corner for the residents of America’s 10th most populous state. Nearly halfway to their […]
Marijuana

New Approach Missouri is closing in on its second quarter finance reporting. Having a strong financial report translates to having continued success in the campaign to create a medical marijuana program in Missouri.

Additionally, New Approach Missouri has been promised $ 200,000 in matching funds once the organization meets its own fundraising goal of $ 250,000 – and NAMO is well on their way with $ 185,000 to be banked by Friday.

Signature collection is steadily progressing with 40,000 signatures collected and with a plan to increase signature production with paid collectors later this summer.

The Michigan State Board of Canvassers officially approved the ballot language put forth by the Coalition to Regulate Marijuana Like Alcohol.

The campaign committee will have 180 days to gather the 252,523 valid signatures needed to place the issue on the November 2018 ballot. An official signature collection kick-off event will be held before the end of May.

If ultimately passed by Michigan voters in November 2018, the initiative would legalize personal possession, cultivation, and use of cannabis for adults 21 and older; legalize the cultivation of industrial hemp; license marijuana businesses that cultivate, process, test, transport, and sell marijuana; and tax marijuana at retail levels with proceeds to support K-12 public schools, roads, and local governments.

On Thursday, supporters of a proposed South Dakota measure to legalize recreational marijuana received a proverbial green light from the state’s attorney general and can now begin collecting the necessary signatures to place their initiative on the 2018 ballot. A perennial underdog in the Mount Rushmore State, backers of the adult-use initiative will need to […]
Marijuana

Germinating the necessary signatures for a historic transformation in the Wolverine State on November 8, the Michigan marijuana legalization initiative handed over to the Secretary of State approximately 100k additional signatures than was necessary, potentially solidifying a spot on the ballot for Michigan’s campaign to legalize adult-use marijuana. After their Memorial Day weekend push to […]
Marijuana

A London temporary worker, sent home for wearing flat shoes, has collected more than 120,000 signatures so far in a petition calling for Britain to make it illegal for a firm to require women to wear high heels at work.

Reaching that total on Friday easily put Nicola Thorp’s petition over the 100,000-signature threshold needed to have Britain’s parliament consider holding a debate on an issue.

Thorp made headlines this week when she launched her campaign describing how she had arrived in flat shoes for her first day to work as a receptionist for accounting company PwC last December to be told she had to wear heels.

She told British media she refused an offer to go buy a pair of heels and was sent home without pay.

Portico, the agency through which Thorp got the job, had set the uniform guidelines and has since reviewed and revised its policy upon PwC’s request. It now says “all our female colleagues can wear plain flat shoes or plain court shoes as they prefer”.

“Employers are allowed to impose different dress codes for men and women, which is fair enough as long as that dress code doesn’t favour one of the sexes,” Thorp told Britain’s ITN television.

“By making women wear high heels you are acting favourably towards men because their footwear doesn’t affect their posture, their ability to move. It doesn’t create long term health problems.” 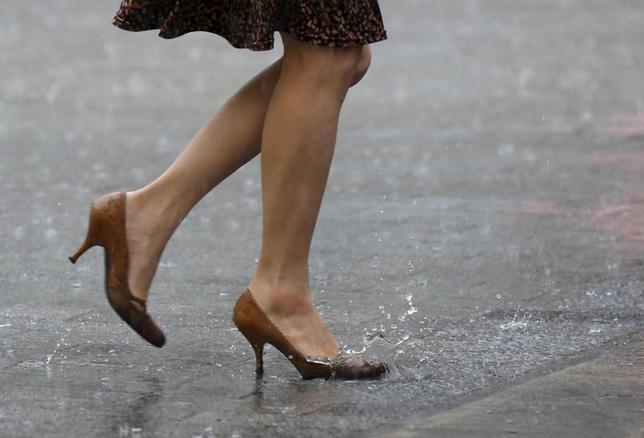 The Campaign to Regulate Marijuana Like Alcohol in Arizona announced Tuesday that it has collected more than 200,000 signatures in support of a proposed initiative to end marijuana prohibition in Arizona. The campaign needs to collect 150,642 valid signatures of registered Arizona voters to qualify the initiative for the November ballot.

After months of hard work, the Campaign to Regulate Marijuana Like Alcohol in Maine  have submitted over 100,000 signatures to the Maine Secretary of State. This effort would not have been possible without the dedication of Mainers who believe in ending the failed policy of marijuana prohibition, and the sheer number of signatures is a good indicator of how badly the people want to bring this issue to voters.

Soon, we will hear back from the Secretary of State, but we are very confident that our campaign collected enough valid signatures to qualify for the November ballot.

Yesterday, the Campaign to Regulate Marijuana Like Alcohol in Massachusetts submitted more than 100,000 signatures to the secretary of state. Only 64,750 signatures are needed, and supporters are confident that the measure will qualify for the 2016 ballot!

The proposal would allow Massachusetts residents 21 or older to possess up to 1 ounce of marijuana. It would also create a 3.75 percent state excise tax on retail marijuana sales that would be assessed on top of the state’s 6.25 percent sales tax.

“You don’t want the tax to be too high because then it’s difficult to undercut the black market, and you want the tax to be high enough so you can finance the regulation and have some money left over,” said Will Luzier, campaign director for the group, as he emptied pages of signatures from two Christmas shopping bags at the state elections office.

The Legislature now has until the first week in May to vote on the proposal, but it’s unlikely to win approval from lawmakers given opposition to legalized marijuana from key state officials including Republican Gov. Charlie Baker and Attorney General Maura Healey, a Democrat.

Senate President Stan Rosenberg said last week he expected voters would ultimately decide the issue. Assuming no action by lawmakers, organizers would need to collect at least 10,792 additional signatures to place the question on the November 2016 ballot.